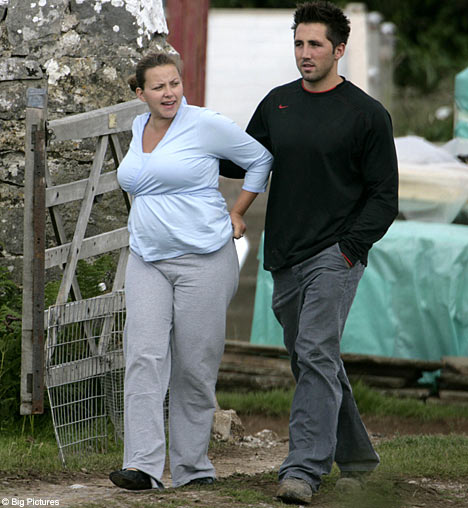 Jesse D Says:
Woohoo glad to see I’m not the only cow-lookin preggo! Damn that Naomi Watts and DOUBLE damn that Heidi Klum!

L Says:
She is so gross. You can’t even tell she’s pregnant, she just looks really overweight. Sick.

Michele Says:
She looks more fat than pregnant. Her belly isn’t prominent and that’s sad because at 7 months, it should be. I blew up like a cow when I was pregnant (went from 92 lbs. to 151!!!!!) but my belly was still prominent.

Blondey Says:
She’s just a kid, so she’ll probably lose it. I feel sorry for her. She used to be so cute!

Mag Says:
Her breast just are so big you can’t see the belly. If she was smaller on top then her belly would show out more. Some girls just get big all over. She also seems short waisted which makes a difference in how the baby lays. She can just be wide instead of poking out. IMO.

fran Says:
Leave her alone , at least she isnt a stick thin anorexic! i love this girl and its nice to see a real woman these days. shell be a great mum

Charlie Says:
I agree, she’s really ‘normal’ and down to earth, just what the ‘celeb’ world needs, if she was a stick thin, orange skinned pregnant girl she would be unhealthy & you would still have something bad to say about her, you can’t win these days. How do you think she should look!

maria Says:
These posts are disturbing! I hope most of you are young girls who have not been pregnant and still think all your self worth has to do with being thin at every moment. Having a baby is a beautiful thing and everyone gains weight differently. I am sure after the baby comes she will be fine, but you people who are saying she is gross have a lot of room to become better people.